"I really enjoy living here and it is the best managed complex I have ever lived in!"

"The location is awesome, the community is absolutely beautiful and the staff caters to you. We love it here!" 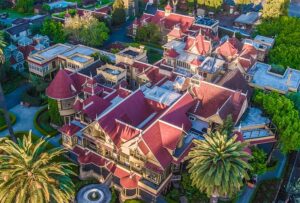 You may be wondering how you can enjoy Halloween without leaving your apartment. If you’re like us, there is nothing that compares to a really good haunted house, but how do you visit haunted places without putting yourself at risk of catching COVID-19? Fortunately, you can tour some of the best haunted places right from your laptop! Below is a list of some truly “must-see” haunted places that you can visit online:

The Winchester Mystery House
Sarah Winchester renovated the Winchester mansion continually for over 30 years, believing that her modifications would thwart the spirits of everyone who was ever killed by a Winchester rifle. The result is an architectural marvel that you can tour online!

The Queen Mary
The Queen Mary is largely considered to be the most haunted ship on earth! Visitors have reported paranormal events on the ship since 1967, including a view of “The Lady in White” and the man who is rumored to have died in the Queen Mary’s boiler room. Take a tour of the boat on your laptop to learn more about this legendary haunt. 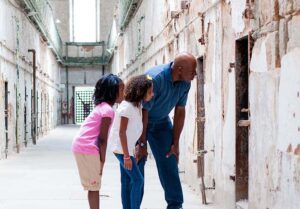 Eastern State Penitentiary
This penitentiary in Philadelphia, PA, was once home to criminals like Al Capone and Willie Sutton. The prison was focused on punishment and is the first facility to use solitary confinement to punish its inmates. Rumors imply that spirits of tortured inmates who went insane still haunt the penitentiary. Take the free tour for a great Halloween scare!

Chernobyl
Experience real-world terror by touring the site of the largest nuclear plant disaster in history. The site is an apocalyptic ghost town consisting of crumbling buildings and even a creepy rusted Ferris wheel. There is no safe way to visit Chernobyl in person, but you can take a Google Maps tour online.

Stanley Hotel, Room 217
If you’re a fan of horror movies, you probably already know about the legends surrounding the Stanley Hotel in Estes Park, Colorado, the hotel featured in the Stanley Kubrick film based on Stephen King’s novel The Shining. You can take a tour of Room 217 and find out what spooked the author so much that he wrote a book about it. 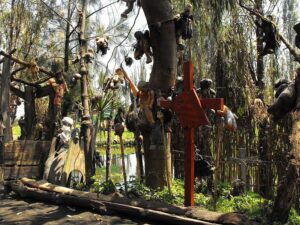 Island of the Dolls
A little girl is said to have drowned in the canal near this island outside Mexico City. Her death was followed by supernatural events that inspired the island residents to hang dolls among the trees in an effort to placate the girl’s spirit. The result is a creepy garden of dolls that you can see when you take a video tour of the island.

Shocktober
Carlheim Manor in Leesburg was the home of Dale Carlheim and his family beginning in 1879. The grounds sit on top of caverns and an underground lake and contained an unmarked graveyard that was unintentionally disturbed by Dale. Afterward, strange occurrences began that eventually killed Dale’s wife and children. Dale himself disappeared without a trace. Today, you can tour the Manor and enjoy a “spirited” haunted house that will have you screaming on your own couch!

Salem Witch Museum
History enthusiasts will love this national tour of some of the most famous locations involved in the Salem Witch Trials during the 17th century in Massachusetts. View cemeteries, courthouses, and even the path to the execution site from the jail on this fascinating virtual tour. 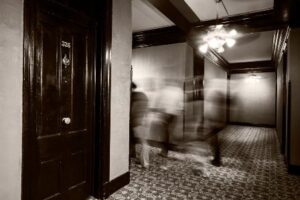 The Crescent Hotel
The Crescent Hotel is believed to be the most famous haunted hotel in the world. Located in Eureka Springs, Arkansas, deep in the Ozark mountains, this hotel is purported to be the home of ghosts, ghouls, poltergeists, and other strange phenomena. Watch the videos on the hotel’s web site and be prepared to be scared.

So open up your laptop or fire up your smart TV and get ready to enjoy Halloween – if you dare!

Keep up with the latest news & events at Carriage Hill!

Carriage Hill living embodies Classic and Modern Living with spectacular Mountain views all year. Live in the lap of luxury with an exclusive grand clubhouse and amenities that defy comparison.