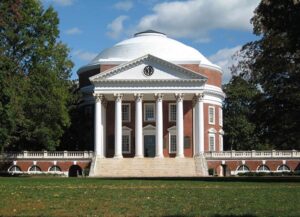 Living in Charlottesville allows you to be surrounded by history! Thomas Jefferson, James Monroe, and many other historic celebrities have left their mark on Charlottesville, and evidence of how far we’ve come as a nation is everywhere. Learning about where you live can be a lesson in history!

Thomas Jefferson’s influence looms large in Charlottesville, and his contribution is evident in the red brick architecture that defines this town. To get a feel for Jefferson’s style, the best place to start a tour is at Jefferson’s beloved University of Virginia. Jefferson’s “Academical Village” is at the heart of the University, boasting the beautiful rotunda at the peak of a sweeping lawn, lined on either side with historic professorial homes and student “ranges”. Jefferson believed that students and professors should live together, and you can see his original design today when you visit The Lawn. 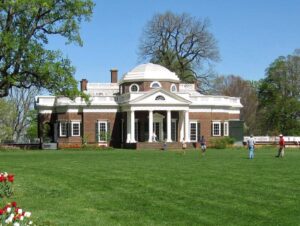 The University’s rotunda is an impressive version of the rotunda Jefferson built at Monticello, his own private residence above Charlottesville. The house began in 1768 on the topmost point of an 868-foot mountain. Jefferson continued to work on the house for more than 40 years, and he referred to it as “my essay in Architecture”. Today, the home is open to the public and serves as a clear vision of our history and the history of the nation.

The effect of Jefferson’s legacy goes well beyond Monticello and the University of Virginia. Near the University lies “The Corner”, home to many historic homes and buildings and a testament to the ever-changing landscape of Charlottesville. Right there on Wertland Street lies the King-Runkle House, a picturesque two-story Victorian home built in 1891, although some traditions claim it was constructed in 1975. The building served as a boarding house and student housing for much of its existence, and it is still known today as “The Runkle House”. 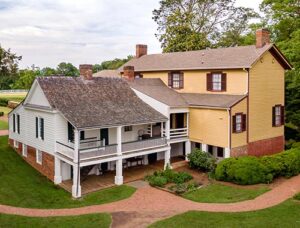 Jefferson also contributed to the ongoing history of Charlottesville through his friends and colleagues. James Monroe, the fifth president of the United States, purchased Highland in 1793 and completed the house in 1799. The home site was chosen by Thomas Jefferson, Monroe’s friend and mentor. The Monroe family remained at Highland until 1823, and in 1826, it was sold. In 1974, the College of William and Mary opened the house as the museum it is today.

Many Charlottesville neighborhoods are part of the history of the town before it became a bustling city. The original county estate of “Belmont” belonged to John M. Carr, whose uncle had been a boyhood friend of Thomas Jefferson. Jefferson’s influence can be seen in the brickwork of Belmont Mansion, which was built in 1837 by the original owner of the farm, John Winn. The mansion was the manor house for the 500-acre farm that became the Belmont neighborhood. 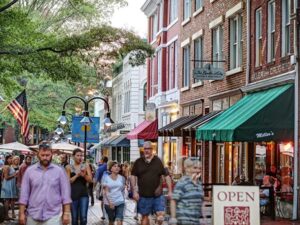 Charlottesville’s downtown area is steeped in living history! The Downtown Mall was built to mimic the Jeffersonian architecture that surrounds it, and it remains the earliest example of a successful pedestrian mall.

Keep up with the latest news & events at Carriage Hill!

Carriage Hill living embodies Classic and Modern Living with spectacular Mountain views all year. Live in the lap of luxury with an exclusive grand clubhouse and amenities that defy comparison.